23 May 2019 - Bangkok, Thailand. The National Center for Genetic Engineering and Biotechnology (BIOTEC), a member of the National Science and Technology Development Agency (NSTDA), Thailand’s Ministry of Higher Education, Science, Research and Innovation (MHESI), in collaboration with the ASEAN Centre for Biodiversity (ACB), today announced the launch of ASEAN Microbial Database (AmiBase), a resourceful database that will accelerate scientific discoveries and innovations for the development of bioeconomy. The press conference was held at the gathering of scientists at the International Conference on Biodiversity (IBD2019) hosted by the Thai Government during 22nd-24th May 2019 at Centara Grand Hotel and Bangkok Convention Centre at Central World in Bangkok,

Southeast Asia abounds with rich and diverse microorganisms that serve as biotechnological resources for industries ranging from food to medicine, chemicals and agriculture, and thus are considered a vital foundation for bioeconomy. They also have a vital role in keeping the ecosystem balanced. Recognizing the importance of microorganisms, BIOTEC, on behalf of the ASEAN Network on Microbial Utilization, and ACB embarked on the establishment of AmiBase to serve as an essential resource for scientists to further develop innovations for the purposes of environmental conservation and sustainable microbial utilization.

For over two decades, BIOTEC has been developing exptrtise on microbial conservation and utilization. In 2014, the center initiated an establishment of ASEAN Network on Microbial Utilization (AnMicro) under the auspices of ASEAN Subcommittee on Biotechnology to foster scientific collaboration and strengthen research and human capacity in the field of microbial utilization among academic and research institutes in ASEAN. It is through this active network that AmiBase was conceived. “This AmiBase will enable access to a larger pool of microbial data that were previously kept individually in different formats, significantly enhancing the utilization study, and subsequently accelerating discoveries and innovations to underpin the development of bioeconomy,” said Dr. Somvong Tragoonrung, BIOTEC Deputy Executive Director.

ACB is an intergovernmental agency, committed to facilitate cooperation among ASEAN member countries and with other organizations on the conservation and sustainable use of biological resources. ACB established ASEAN Clearing House Mechanism (CHM) as a regional platform for sharing biodiversity information, which can support policy development and decision-making on matters related to biodiversity conservation. “We are very pleased to collaborate with AnMicro, which is represented by Thailand’s BIOTEC, in creating AmiBase and linking AmiBase to the ASEAN CHM’s species database. This will tremendously enhance the feature of ASEAN CHM to better serve the needs of ASEAN member countries on biodiversity conservation,” added Dr. Theresa Mundita S. Lim, ACB Executive Director.

MHESI serves as Thailand’s representative in the ASEAN Committee on Science, Technology and Innovation (ASEAN COSTI) an ASEAN body to foster scientific cooperation among ASEAN member countries and with outside organizations. Assoc. Prof. Soranit Siltham, Permanent Secretary of MHESI, remarked that “this ASEAN Microbial Database is truly a contribution of the ASEAN scientific community to green technology, sustainability, and innovation. It demonstrates the spirit of ‘Advancing Partnership for Sustainability, which is the theme of Thailand’s 2019 ASEAN Chairmanship”.

Dr. Lily Eurwilaichitr, principal investigator of this project, explained that AmiBase was established with a purpose to integrate microbial biodiversity data from various sources, such as public biodiversity databases, academic reports, and datasets from microbial resource centers. An integrated part of Amibase is also built on the software called iCollect, which was developed by BIOTEC research team for the management of biological resources. To establish AmiBase, BIOTEC team organized a series of training on microbial data organization and management, as well as the use of the software, to staff working in key microbial resource centers in ASEAN, so that each center could set up and maintain their respective microbial data holdings. A common repository, known as AmiBase, was then created for storing the microbial data from each data holder.

However, even such integration cannot cover all microbial biodiversity because many microorganisms are unculturable and, hence, undiscovered. AmiBase has also taken another approach to mine and extract data from these “hidden” microbiomes using metagenomic and bioinformatic technologies. The collected data are systematically compiled and classified into taxonomic groups.

AmiBase data are disseminated via a website interface, which is readily and easily searchable. Currently, AmiBase presents more than 30,000 species of ASEAN’s microbes including bacteria, archaea, fungi, algae, protozoans, and viruses. The database offers graphic visualization tools, with which users can customize to display microbe-microbe or microbe-habitat relationships. Moreover, in order to answer scientific needs from biologists, AmiBase also provides online analytical tools, which can computationally compare microbial species and microbiome structures against the references in the database. AmiBase currently holds microbial data ever-been reported /recorded from all ten ASEAN member countries. It is linked to the ASEAN species database of the ASEAN Clearing-House Mechanism (CHM) to serve the biodiversity conservation purposes.

extract data from these “hidden” microbiomes using metagenomic and bioinformatic technologies. The collected data are systematically compiled and classified into taxonomic groups. This database is fast expanding, as each of the sixteen participating microbial resource centers are committed to recruit new institutes in its home country to join and train their staff on microbial data organization and management. 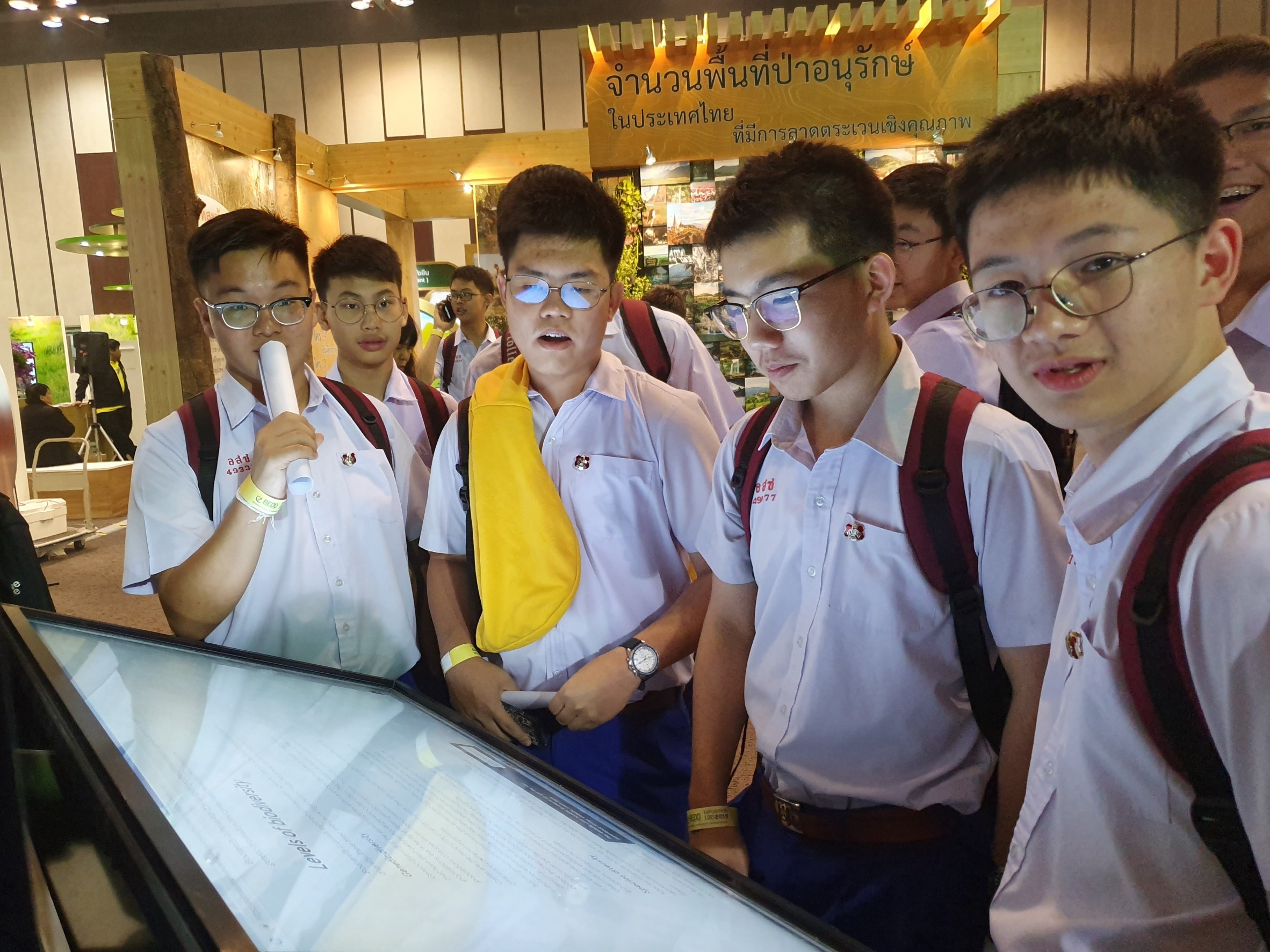 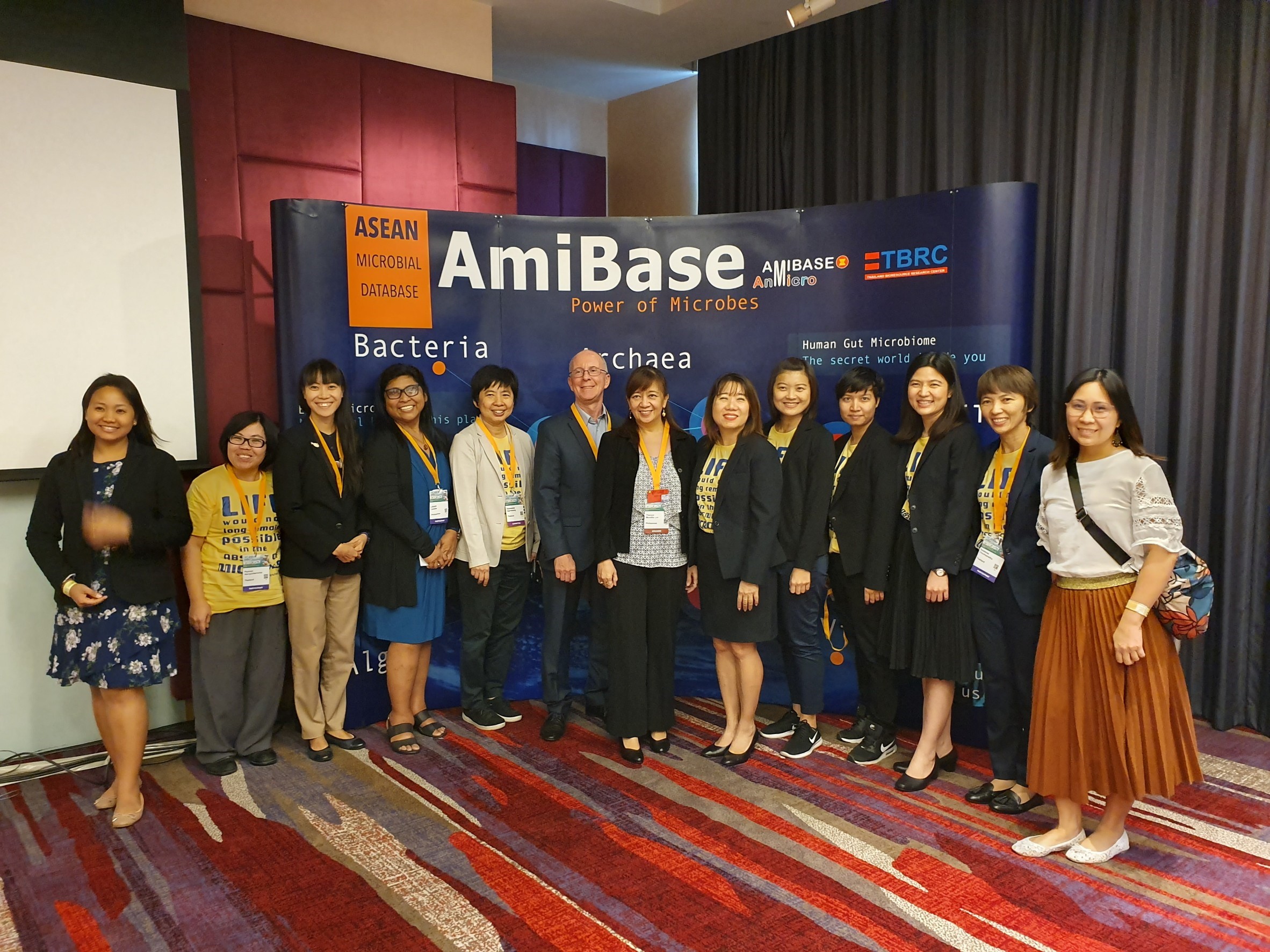 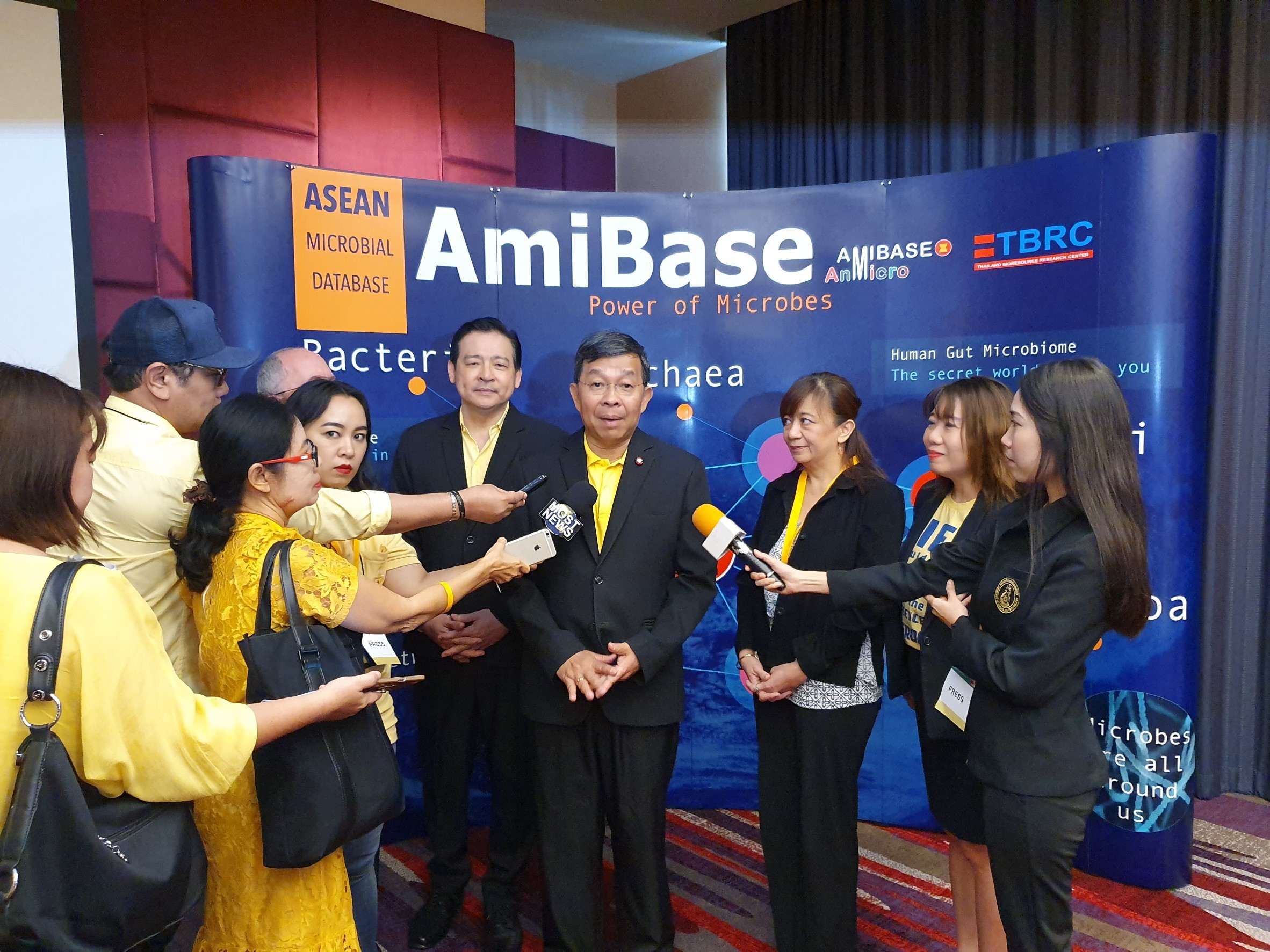 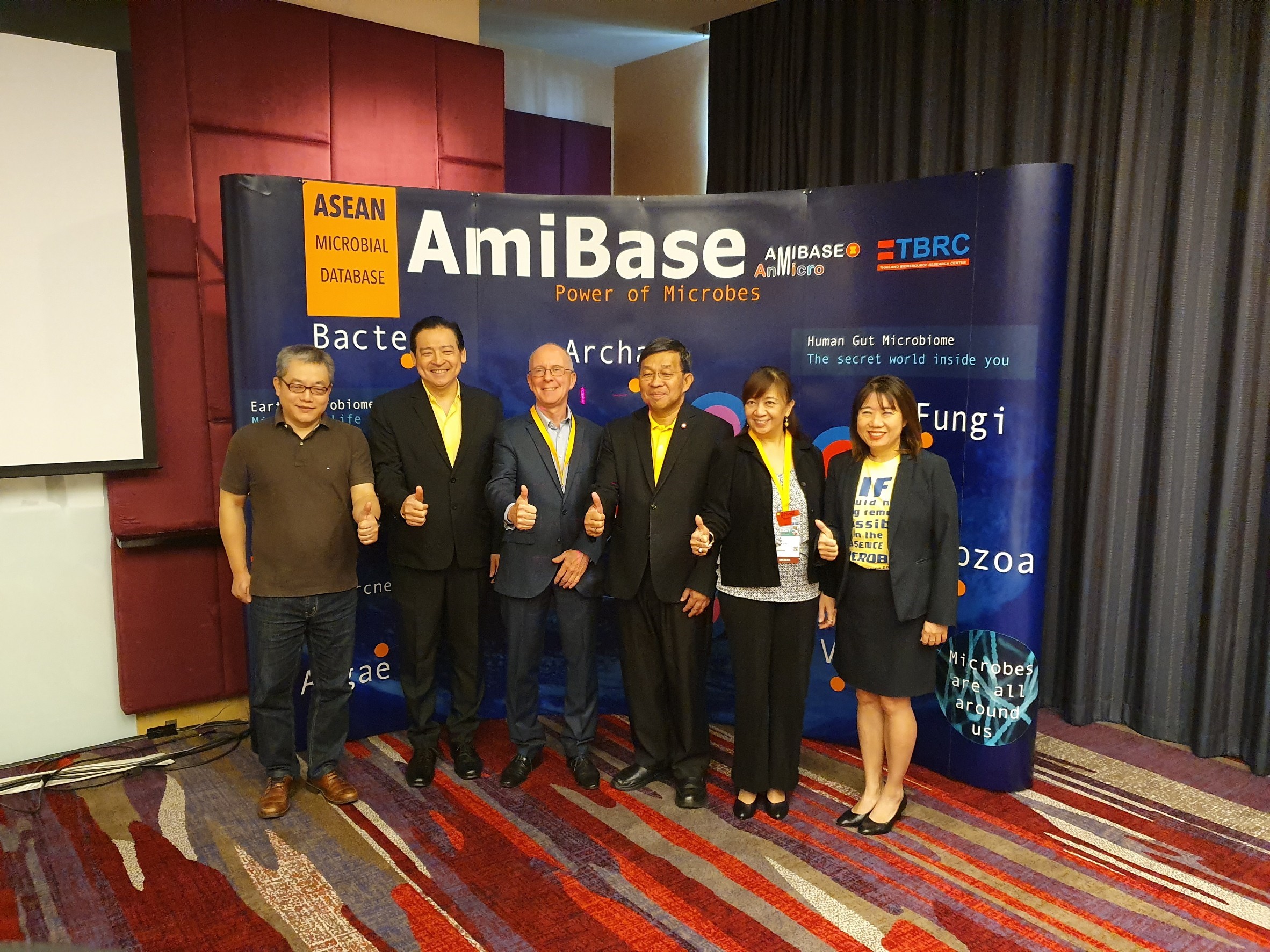 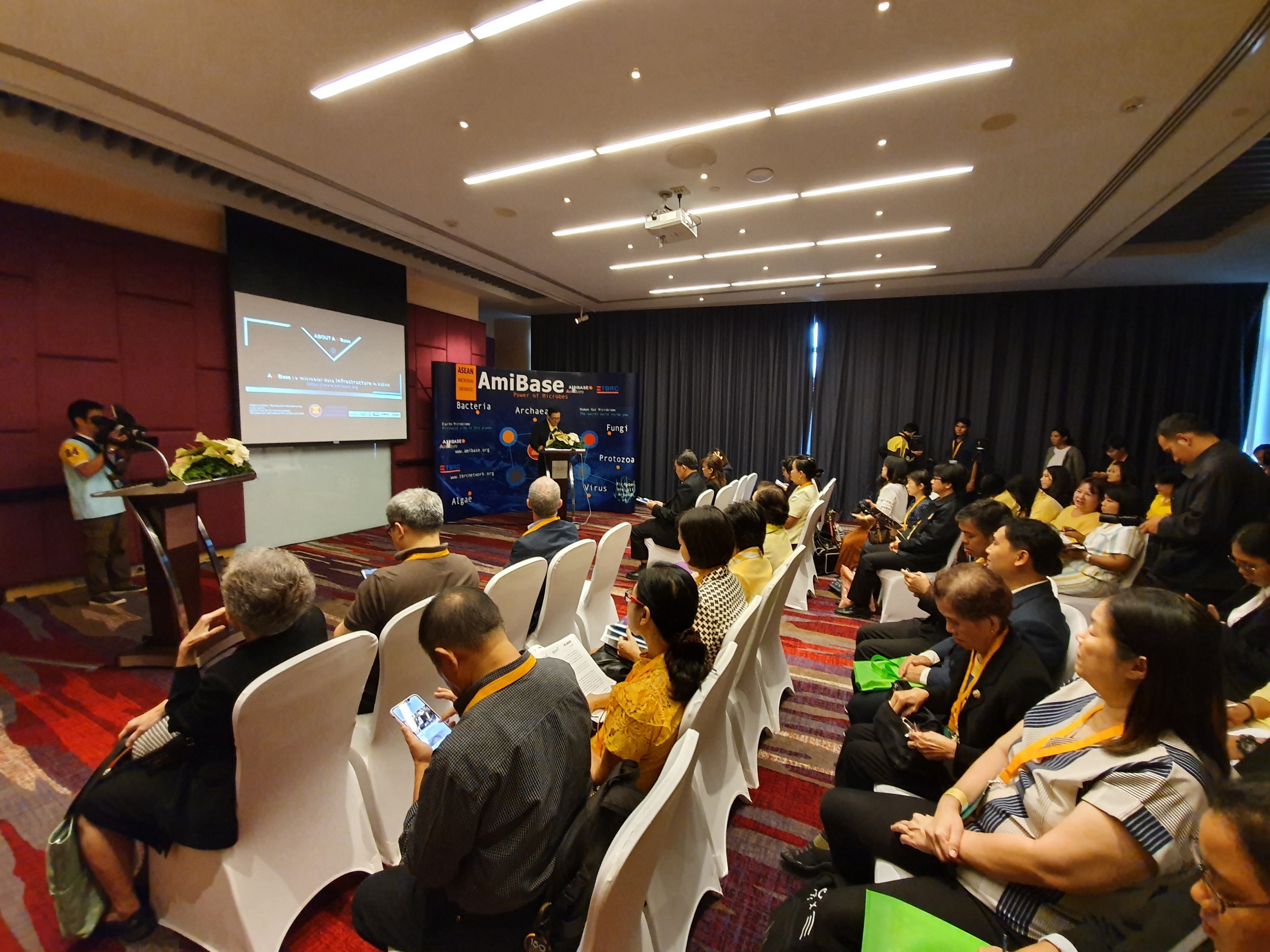